Hollywood Legends and Their Watches

Gorgeous watches and Hollywood stars have always been a match made in heaven. From the beginning, the faces of tinseltown have liked to be seen with precious luxury watches on their wrists. So, let’s take a look at the brands that Hollywood legends are still going nuts for.

What Chaplin and Bogart Wore

Charlie Chaplin is one of the few stars of the silent film era who successfully transitioned to the “talkies.” Films like The Kid, Modern Times, and The Great Dictator are still considered masterpieces to this day. As a founding member and partner of United Artists, he also laid the foundation for modern Hollywood. One thing many people don’t know is that Chaplin was also a watch enthusiast. Among other collector’s pieces, he owned a golden IWC Automatic, a Rolex Oyster with the crown on the left side, as well as a Jaeger-LeCoultre Memovox. 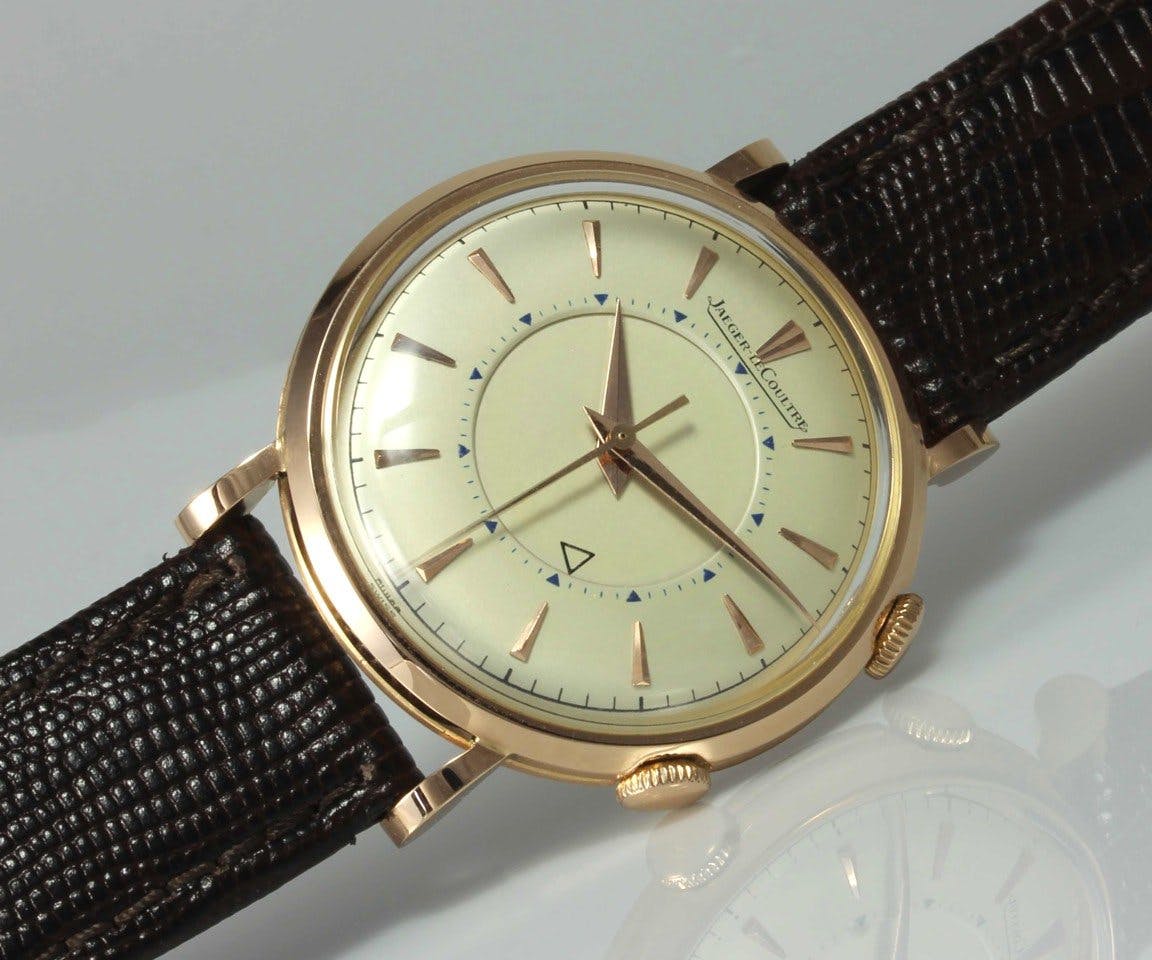 Chaplin received his JLC with an alarm function as a gift from the government of the Swiss canton of Vaud, where he took up residence with his wife and eight children in 1953. The actor had left the USA to avoid persecution during the McCarthy era, as someone had accused him of having communist ties. His JLC bears the inscription “Hommage du Gouvernement Vaudois à Charlie Chaplin – 6 Octobre 1953.” It is one of the centerpieces of the exhibition “Charlie’s World,” which has been on display in Chaplin’s former villa in Corsier-sur-Vevey since 2016.

Bogart and His Longines

Humphrey Bogart is as big a Hollywood legend as Charlie Chaplin. In 1999, the American Film Institute honored Bogart as the “greatest American male screen legend of all time.” In the classic film Casablanca, the New York native also helped a watch make its big premiere. More specifically, he had on a Longines Evidenza with a rose gold dial. Its barrel-shaped case is made of yellow gold, as are the bracelet, hands, and indices. What’s special about this watch is that it was actually Bogart’s personal timepiece. 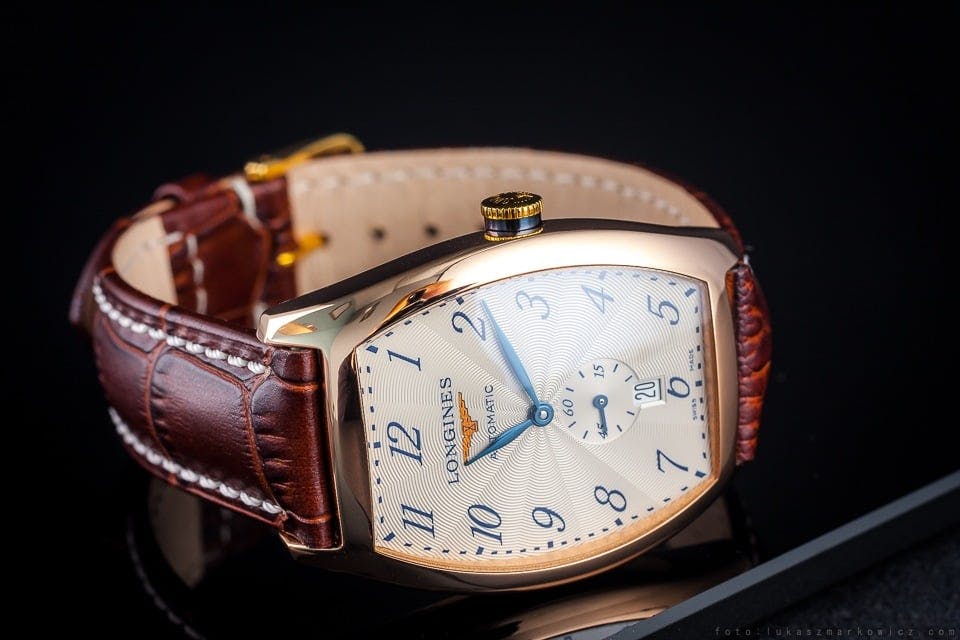 As a testament to the actor’s lasting star quality, Longines launched an advertising campaign in the early 2000s featuring pictures of Humphrey Bogart alongside the slogan, “Elegance is an attitude.”

Elizabeth Taylor and the Sinuous Serpenti

Expensive jewelry and beautiful watches were among Elizabeth Taylor’s trademarks. The film icon owned a vast collection of exceptional timepieces – many of which were diamond-studded originals from Cartier or Vacheron Constantin. However, modern classics like the Patek Philippe Nautilus could also be found among her possessions. 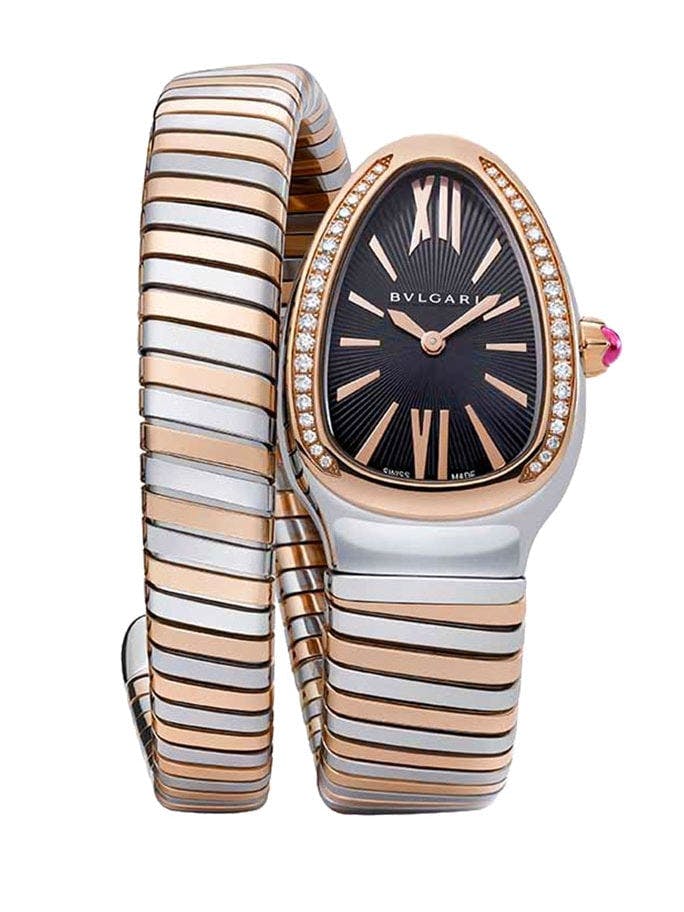 Perhaps the most famous watch in her collection was the Bvlgari Serpenti, which could be seen on her wrist on the set of Cleopatra in 1963. The watch owes its name to its shape: Like a snake, the bracelet winds around the wearer’s arm wearer several times, while the actual watch itself is hidden in the head of the stylized animal. Pictures of the film diva with this remarkable timepiece were shown around the world, helping the then relatively unknown Italian company make its international breakthrough.

Who gave her the watch from remains up for debate. According to one version of the story, the watch was a gift from her husband at the time, Eddie Fisher. Some say that it was her Cleopatra co-star and later on-again/off-again husband, Richard Burton, who gave her the Serpenti. Finally, other sources reported that Taylor bought the watch herself using her earnings from Cleopatra. Whichever story is true, the Serpenti is eternally linked with Elizabeth Taylor. That’s why chairman Paolo Bulgari sent her a modern version of the Serpenti in 2010. The watch is inscribed with the words, “To Dame Elizabeth, with Gratitude.”

Almost every Hollywood star owns at least one Rolex. The watches of Paul Newman, Clint Eastwood, and Steve McQueen helped propel this brand to unrivaled levels of fame.

As a racing enthusiast, Newman often wore a Rolex Daytona ref. 6239. This watch has a so-called “panda” dial, which is a white background with a printed black minute track and black subdials. The reference was a slow seller when first introduced in the late 1960s, but today it counts among the most desirable Rolex models, fetching prices upwards of $200,000. Newman’s personal Daytona went down in history as the world’s most expensive wristwatch. In October 2017, it was auctioned in New York for the record sum of $17.75 million.

A Root Beer for Clint Eastwood

Clint Eastwood’s watches of choice are the Rolex GMT-Master ref. 1675/3 and its successor, the reference 16753. Because of its brown dial and brown-beige 24-hour bezel, Rolex fans gave this timepiece the nickname “Root Beer.” Since these two-tone Rolexes can be seen on Eastwood’s wrist in several films, they also go by the names “Clint Eastwood” and “Dirty Harry,” the latter based on his celebrated role as Harry Callahan. In addition to his Rolexes, the 89-year-old actor also owns timepieces from A. Lange & Söhne and has been spotted wearing a TAG Heuer Monaco as well.

Steve McQueen: Between the Monaco and the Submariner

While Eastwood owns a Monaco, this model actually owes its success to another Hollywood great: Steve McQueen. He chose the watch with a square stainless steel case for the film Le Mans, which came out in 1971. The movie was a flop, but the watch became a lasting hit and is still one of the most popular TAG Heuer timepieces to this day.

Even though McQueen made the Monaco famous, he was actually a dedicated Rolex fan. He was particularly fond of the Submariner types 5512 and 5513. In early 2018, a Submariner ref. 5513 that McQueen had given to his stuntman, Loren Janes, caught the world’s attention when the Phillips auction house announced it would be going up for auction. The underside of the watch is even engraved with the words, “Loren, the best damn stuntman in the world, Steve.” Sadly, the watch never came under the hammer. Phillips had to withdraw the offer under pressure from the late actor’s family. 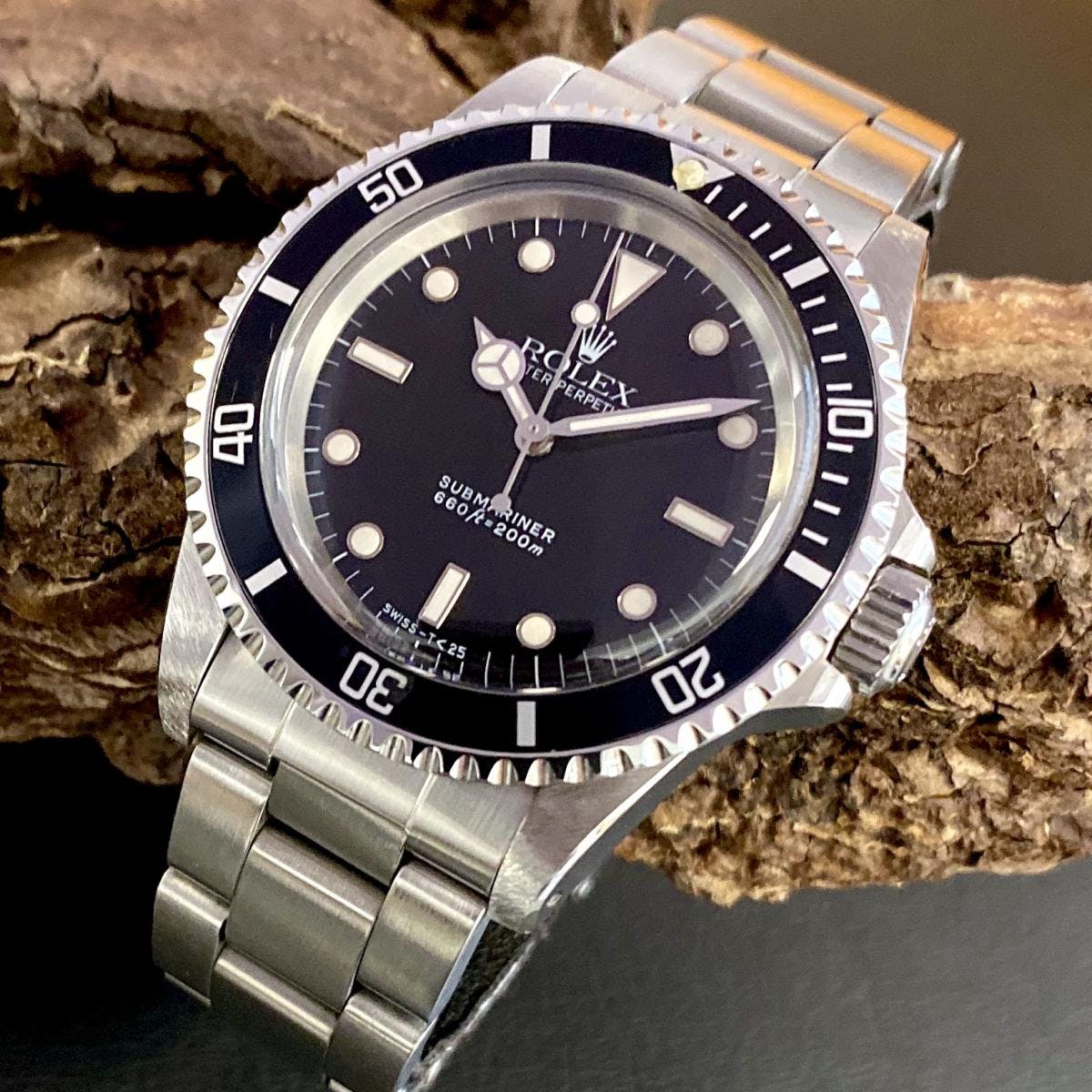 Marlon Brando was another famous Hollywood Rolex wearer. His GMT-Master ref. 1675 from the classic movie Apocalypse Now sold for $1.95 million at auction in December 2019.

That’s a hefty price when you consider that the watch is missing its typical GMT bezel. Brando removed it because the film’s producers felt it was too flashy for the movie. Intent on wearing his beloved GMT-Master, he simply grabbed a screwdriver and pried off the bezel himself. His love for that watch is evidenced by the signet M. Brando, which he carved into the bottom of the stainless steel case himself.

James Cameron and the Deepsea

James Cameron has a special place in the Rolex universe. He is the first and, so far, only living person to whom the Genevan manufacturer has officially dedicated a watch – the Sea-Dweller Deepsea James Cameron Edition with a D-Blue dial. Rolex and the famed film director worked together closely on Cameron’s deep sea expedition to the Mariana Trench. Rolex engineers fixed an experimental watch to the outside of the one-man submarine with which Cameron dove 36,000 ft (10,984 m) down to the Challenger Deep. Bearing the name Deepsea Challenge, the watch withstood the hardships of the dive unscathed and set a new depth record. 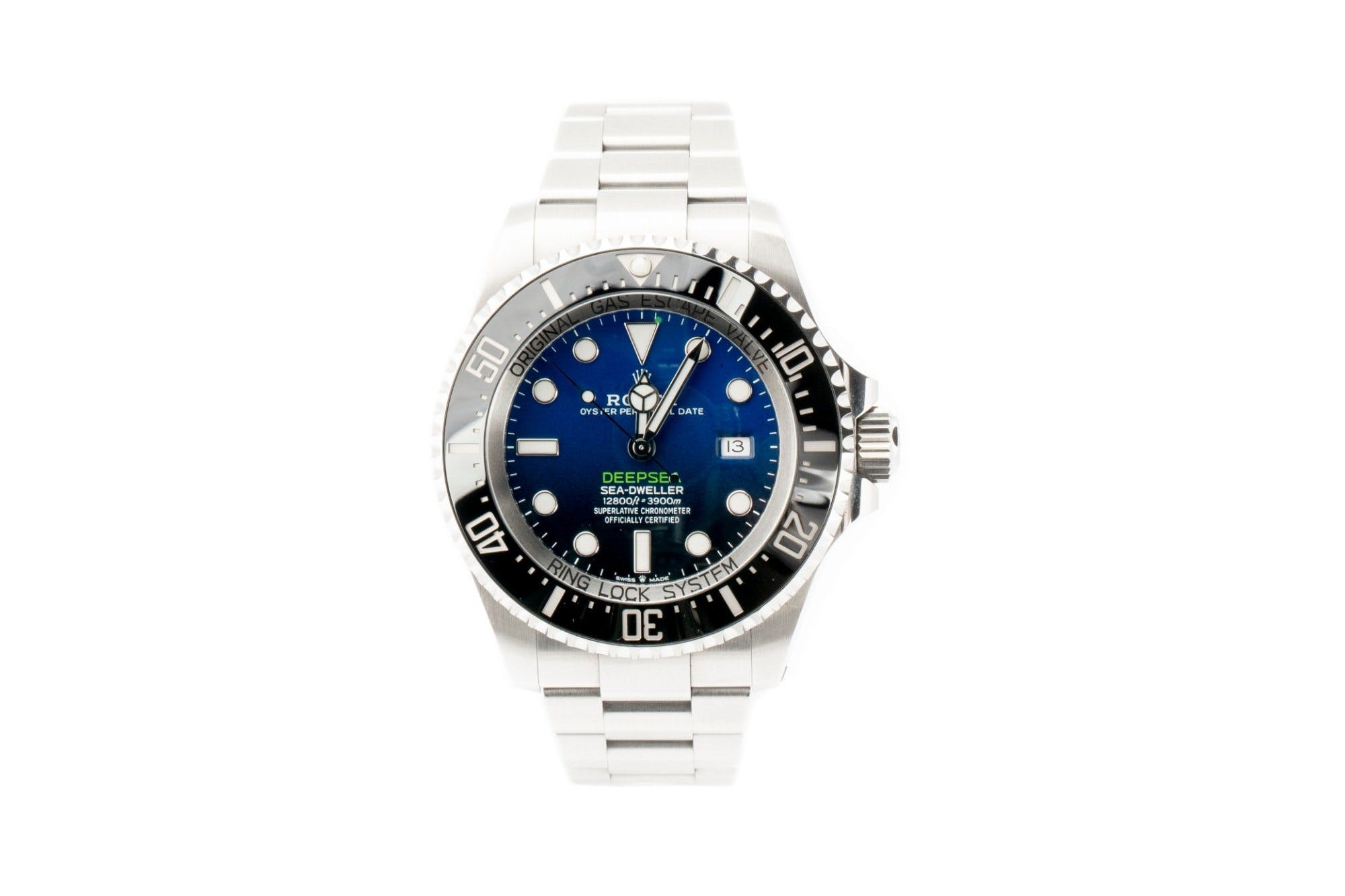 In honor of this event, Rolex created the aforementioned James Cameron Edition of the Sea-Dweller in 2014. Its dial features a color gradient from blue to black, representing the descent into the farthest depths of the ocean. The James Cameron Edition is “only” water resistant to 3,900 m (12,800 ft), but that should be more than adequate for everyday use.

What Will Be the Next “Paul Newman” ?

My name is René Herold, and I first discovered Chrono24 in a job listing. Admittedly, I didn't really care about watches before coming to Chrono24. However, after a few …

Watches in This Article 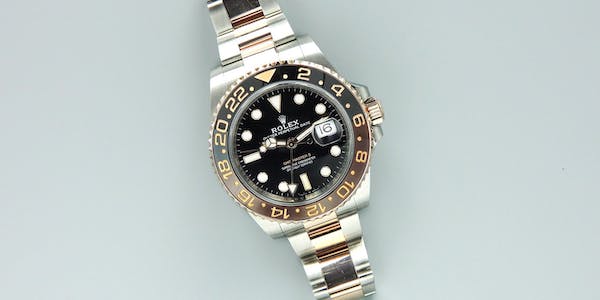 The Rolex GMT-Master II Root Beer: What makes this watch so special?

The Grandfather of the Modern Chronograph Movement: Seiko 6139